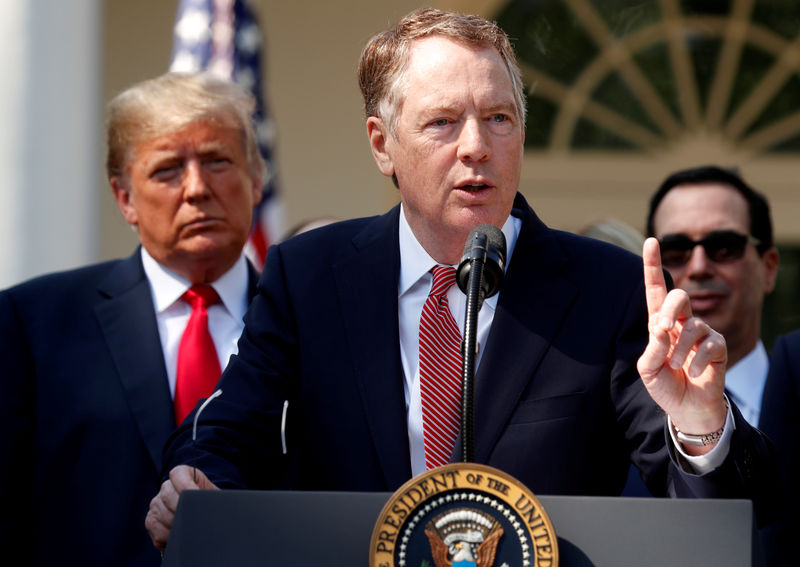 By David Lawder and David Shepardson

WASHINGTON (Reuters) – Republican senators said on Tuesday that U.S. Trade Representative Robert Lighthizer was making progress in negotiations with Democrats on passage of a new North American trade deal and the talks were being handled “in good faith.”

But following a closed-door meeting with Lighthizer, the senators said the timing of any vote on the new U.S.-Mexico-Canada Agreement (USMCA) was up to House of Representatives Speaker Nancy Pelosi, who is managing demands within her party for stronger enforcement of labour standards and other revisions.

The Senate’s number two Republican, John Thune, said Lighthizer told them he was “still negotiating with Speaker Pelosi and he thinks there is a sincere interest in the House in trying to get this done, and so hopefully they can find a way to get it to passed by the House.”

Thune said Lighthizer did not specify a time frame for a vote, but Republicans are aiming for passage by Congress’ August recess, avoiding potential budget clashes in the fall and an intensification of campaign activity for the 2020 presidential election.

“We want to do this before the end of the summer. I think that’s important — so that means he’s got to start moving pretty quickly,” Thune said.

The Trump administration on Friday eliminated a major obstacle to passage of the deal to replace the North American Free Trade Agreement by announcing it would remove U.S. tariffs on Canadian and Mexican steel and aluminium.

But a number of Democrats have said they cannot support USMCA without a mechanism to ensure that Mexico enforces labour standards in the agreement aimed at allowing workers to unionize as well as stronger environmental standards. Some also have raised concerns that a 10-year period of data exclusivity for biologic pharmaceutical makers will raise U.S. drug prices.

Senator Rob Portman said Lighthizer told Republican senators that he believed Democrats were negotiating in “good faith” and were “trying to get to yes.”

“The alternative is NAFTA,” said Portman, a former USTR during the George W. Bush administration. “If members of the Democratic caucus don’t want to support USMCA, we’re left with the status quo and the status quo from their point of view is worse in every respect.”

Portman said Lighthizer made clear that the USMCA text could not be reopened, but discussions included other ways to address Democrats’ concerns, including side letters to the pact. “It can move quickly, once there’s an agreement” between the administration and Pelosi, he said.