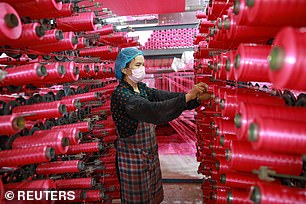 China’s economy grew at the slowest pace on record in the three months to June, as a trade war with the US took its toll.

The country’s economy was 6.2 per cent bigger in the second quarter than it had been a year earlier, according to official figures from the National Bureau of Statistics.

This was the lowest figure since 1992, when China’s economic data first became available. And it was a slowdown from growth of 6.4 per cent in the first quarter.

The construction and industrial sectors suffered the most, as exports were damaged by tariffs imposed under President Trump on about £200 billion of goods.

Beijing and Washington have agreed to restart trade negotiations in a bid to end a spat that has dragged on for more than a year.

Trump tweeted: ‘The US tariffs are having a major effect on companies wanting to leave China for non-tariffed countries. This is why China wants to make a deal.’