The Trump administration seems to have the illusion that if you raise the stakes high enough, other countries will cave to US demands. There might also be an element of creating foreign adversary in order to unite the domestic front, we don’t know.

Trade tensions have been taken way too far when the government slapped tariffs on Canadian steel exports because of national security concerns, but in the case of China, there are some legitimate concerns. Mind you, these concerns don’t involve:

Negotiating with countries is different from the wheeling and dealing world of New York real estate. This should be especially clear with a nation-first politician like Donald Trump.

Where making maximum demands on other parties might work in New York, it’s much less likely if one is dealing with proud, independent nations – that should have been the lesson from the North Korea fiasco.

Just as there is one thing worse than a severe economic recession, which is caving to US pressure for the Iranian ayatollas, the same holds for Chinese politicians in charge of policy.

It’s true that the pain from the escalation in the trade war is probably significantly larger in China compared to the US, but that doesn’t make them more likely to be the first to cave, especially considering that what the US administration seems to demand is a wholesale change of China’s economic model. That’s never going to happen. Since there are no free elections, they can endure the pain for longer, and much fewer people own stocks, so even while the sell-off in China might be worse, it’s hitting much fewer people.

In fact, caving to US demands, or even being seen to be caving, might well be a one-way ticket to political oblivion. Which is why China’s leaders called President Trump’s bluff. Contrast this with the situation in the US.

Trade experts like Krugman argue that the short-term economic impact as such on the US economy is fairly moderate, and who are we to disagree? However, a further escalation isn’t likely to go by unnoticed, and there is this ephemeral concept called “confidence”, of which the stock market might be one of the best indicators:

The market is already reeling, and this could become uncomfortable pretty soon for a president who prides himself on the rally in the markets.

The risk is that this becomes a protracted conflict with each party digging in, egged on by heated domestic rhetoric. The longer this lasts, the greater the following risks:

Sentiment is turning, and at a certain point, this can very well start to affect consumption, investment, and lending decisions in the real world. We’re not there yet, but look how the sell-off at the end of last year cowered the Fed into one of the more spectacular retreats in policy. This wasn’t because of the market sell-off itself but because of the increasing signs that sentiment could hit the real economy, even if much of the more immediate risks were abroad.

Moreover, in a highly leveraged financial system, you never know what you’re going to find when the investor flows recede. Things can go very fast here. Look how Argentina was able to sell a 100-year bond in 2016, only to be hit by the receding flows pretty soon after.

Another real risk is a substantial yuan depreciation. It’s the most effective way the Chinese can absorb the direct tariff cost on their competitiveness, but it runs the risk of becoming a self-fulfilling prophesy.

The markets have already twice succumbed to yuan depreciation scares, in 2015 and at the start of 2016, and the PBoC spent $1 trillion of its $4 trillion reserves plus draconian capital controls to stop the rot.

We’re not talking hypotheticals here – guess when that gap-up happened? On the day of the Trump tweets announcing the 25% tariffs: 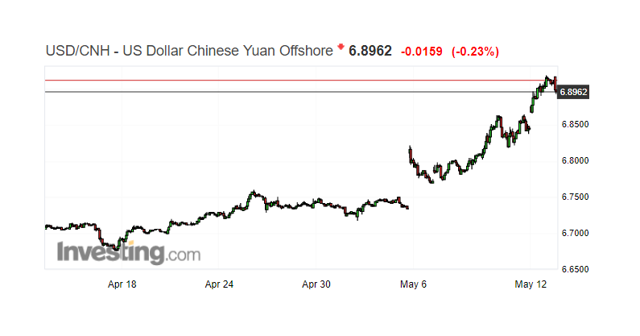 A substantial yuan depreciation will risk inserting a major deflationary blow to the world economy as it exports the effects of the US tariffs on China to the rest of the world.

Given the shaky state of the eurozone, we’re not relishing this prospect at all. We have long argued that the eurozone is one downturn away from disintegration, with Italy as its focal point.

Italy is already in a recession and has a dysfunctional government consisting of a left-wing and right-wing populist party which are constantly bickering. What’s more, it has unsustainable debt dynamics and a potential banking doom loop, should the debt dynamics trigger a market selloff, and has no lender of last resort.

With all the debt and leverage in the world economy, it’s a bit like riding a bicycle – you have to keep cycling to stop falling over.

While the direct monetary impact of the tariffs is fairly moderate (it’s a modest, albeit highly regressive, tax increase), another likely consequence is a further relocation of supply chains and decoupling of the US and Chinese economies.

We have already read numerous company CCs which described rerouting supplies from China, albeit not usually back to the US, and we’re not imagining stuff. From Monday’s issue of DigiTimes:

If 10% tariffs can do that, 25% of tariffs will accelerate this and the next round, where the US levies tariffs on all Chinese imports even more.

Some within the US administration seems to relish this, as it weakens China economically, but a hard Chinese landing won’t pass the US unnoticed, and the end result could very well be two competing economic blocks and a new sort of cold war.

One of the very first economic measures the Trump government took was to get the US out of the TPP, which not only gave up a lot of leverage over China, but the mostly ASEAN countries who are part of the TPP (without the US) are now firmer in China’s orbit as a result, and they will have unenviable choices to make in terms of their future alignment.

It’s also unfortunate that Trump has been waging trade wars on multiple fronts (see here for an overview), alienating many partners in the process.

Now might be as good a time as any to remind people of the unpopular thesis that trade isn’t a zero-sum game and that both the US and China have greatly benefited from their economic integration the past couple of decades.

The US got increased exports as well – not as spectacular as the Chinese exports to the US, but this is in part an optical illusion. Much of China’s exports to the US contain value added produced elsewhere, even from the US itself: 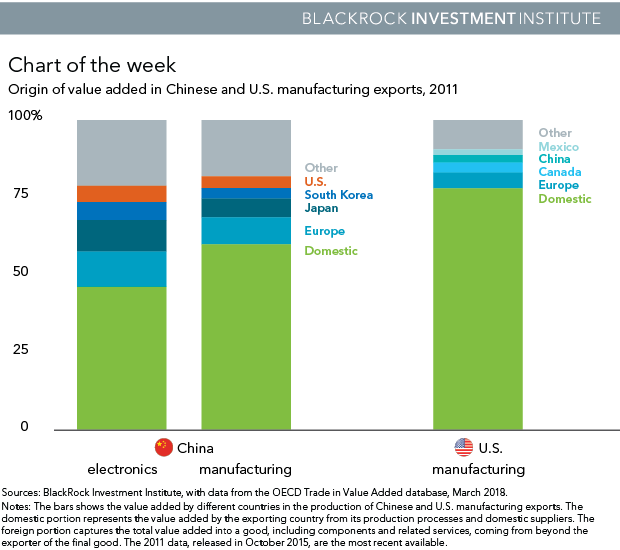 You see that less than half of the value added of Chinese electronics export to the US is actually produced in China itself. The iPhone is a classic example:

In the case of the Apple iPhone, this means that China’s exports balance accounts for the full $500 iPhone value, when China adds only approximately $15 to $30 of the value to the phone. Most of the iPhone value accretes to Samsung in Korea ($150) and to Apple – the brand owner and engineer. This highlights how the normal accounting of trade flows is inherently distorted under the current trade-deficit estimates.

Yes, the US has lost manufacturing jobs as a result, but it failed to compensate those who lost from trade like other countries have (via massive active labor market policies, for instance in the Nordic countries, where there is little in the way of an industrial waste land as a result).

The US has also gained. It found willing buyers for its Treasuries, keeping interest rates low, cheap consumer goods, keeping inflation low – which allowed the Fed to keep low interest rates, and which in turn increased economic growth and employment.

It’s not perfect, and we’re not blind to China’s IP theft and the conditions it places on American companies operating in the country. But China’s rise has propelled half a billion people out of poverty and turned them into eager consumers of US agricultural, cultural and high-tech products.

While a number of American grievances are right, the Trump administration seems to want a wholesale sellout of China, abandoning its economic model. That’s not going to happen, and even less so because they also antagonized potential allies, like ASEAN countries, the EU and Canada.

There are two choices here: either some middle ground is found or this could spiral out of control, with major economic risks involved and a wholesale decoupling of the Chinese and American economies. Economics 101 argues quite clearly that that world is unlikely to be better than the one we have, despite all the imperfections of the latter.

Disclosure: I/we have no positions in any stocks mentioned, and no plans to initiate any positions within the next 72 hours. I wrote this article myself, and it expresses my own opinions. I am not receiving compensation for it (other than from Seeking Alpha). I have no business relationship with any company whose stock is mentioned in this article.