Microsoft CEO Satya Nadella speaks at a fireside chat with the CEO of German carmaker Volkswagen (unseen) where they unveiled their cooperation for the Volkswagen Automotive Cloud in Berlin on February 27, 2019.

Microsoft’s answer to the trendy team chat app Slack has exceeded Slack in regular usage after only two years on the market.

On Thursday the company revealed a statistic it had previously kept to itself: The Teams service has more than 13 million daily active users, which puts it ahead of Slack’s last reported number of 10 million daily users in the three months that ended on January 31. On a weekly basis, Teams has 19 million active users. Slack, whose app became publicly available in 2014, no longer discloses that figure; in 2017 it said there were 9 million weekly active Slack users.

A chart Microsoft released suggests that that Teams is growing faster than Slack in terms of daily users, despite being larger. 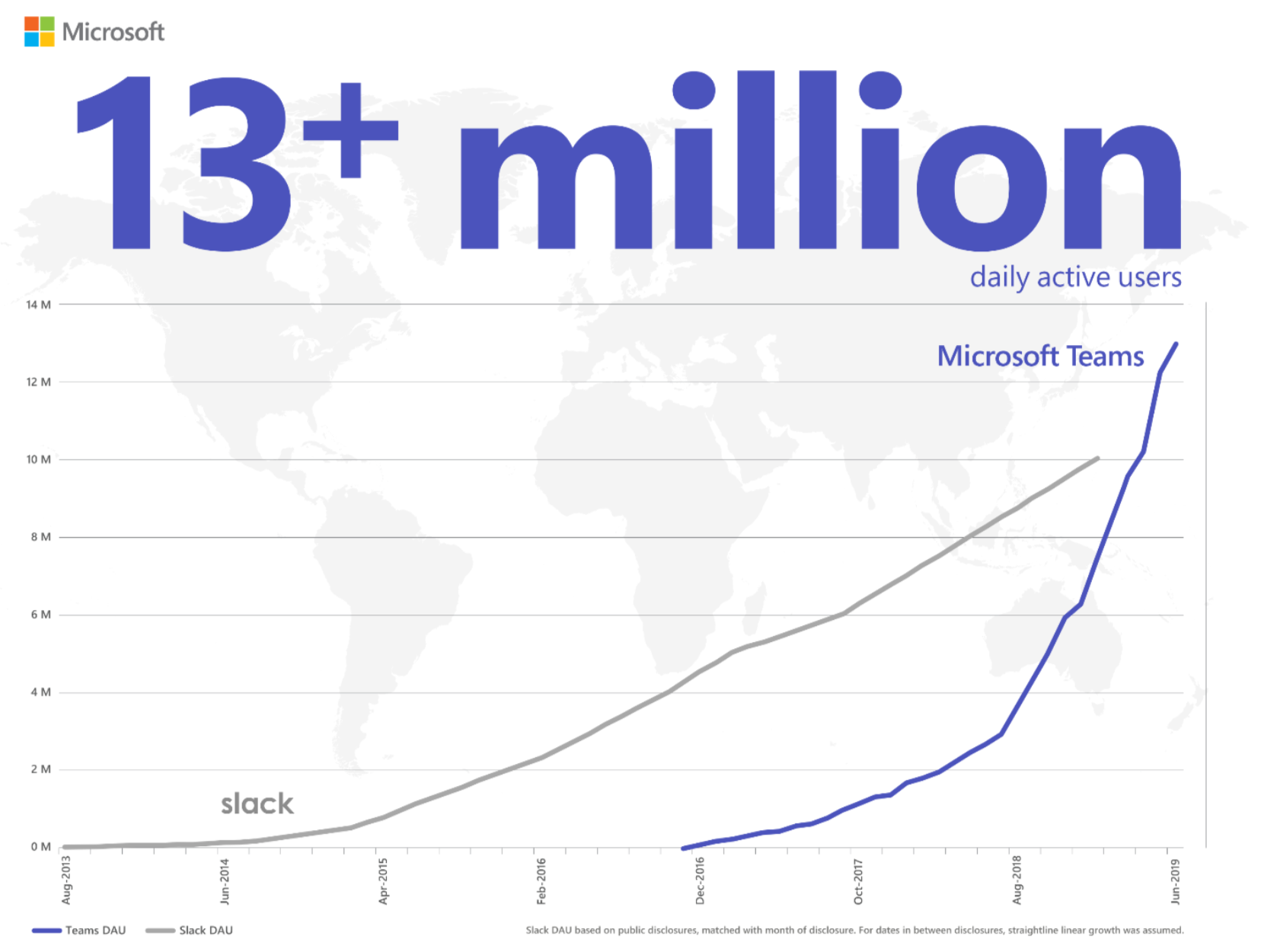 The success of Teams, at least in relation to Slack, is an example of how Microsoft can make hits out of young products just by distributing it to its large collection of customers. The company has done this in the past with software like Internet Explorer in Windows and SharePoint in Office. In addition, teams is part of the Commercial Cloud category that investors watch closely; in the most recent quarter Microsoft’s Commercial Cloud revenue grew 41%.

Shares of Slack haven’t ended the day higher than the $38.62 price at which they closed on its June 20 debut.

Since March 2017, Microsoft has included Teams in companies’ subscriptions to the Office 365 bundle of productivity software at no additional charge. In Teams, people can make calls and exchange messages with teammates, and work on Word and Excel files without switching to different applications.

“Teams, I think, is a canonical example of the flagship of the Microsoft 365 product, which is person-centered, customer-centered,” said Rajesh Jha, Microsoft’s executive vice president for experiences and devices, and the person responsible for Office at the company.

“You select the group that you’re doing a project in or you’re working with, and all the tools and the applications and the context all comes to you there.”

Microsoft uses it internally, too — including the senior leadership team that includes Jha alongside CEO Satya Nadella and finance chief Amy Hood.

“We’ve got a Teams group, and not only are our meetings and our chats integrated in there, but our business dashboards, our shared documents or any other business process that we interact with is all in that same context of the Teams scaffolding,” Jha said.

One such business process, he said, is a playbook for business continuity that Microsoft’s IT team built.

Nadella is all about having Microsoft operate as one company, a conscious break against its historical tendency to break into warring silos, Jha said. So instead of having many one-on-one conversations, Nadella meets with Jha and the others on the senior leadership team for hours every Friday.

This is reflected in how the group uses Teams.

Jha said the group uses “less DMs [direct messages between individuals] and much more group messaging, much more shared context in the documents and business dashboard.” He added that he communicates with the leaders in his team in a similar fashion.

Jha said he personally prefers Teams to email — he particularly appreciates the ability to react to messages through emojis in a more lightweight fashion than one can over email — although he also oversees Microsoft’s popular email programs, including Exchange and Outlook.

He said Teams has helped email get used for the right things inside Microsoft. In certain contexts Jha is seeing less email communication, although he stopped short of saying he’s getting less email altogether after adopting Teams.

“When I talk to customers or partners, or when I’m not logically in kind of a group with people where there’s sporadic, intermittent interaction, email is still the tool. But when I’m in the senior leadership team or my leadership team, or I’m in some project that’s about to launch in those groups, rather than going back and forth in email, it’s much more efficient to have the chats, the transcripts of meetings we’ve been in, the dashboards, the files, all of that in one place,” Jha said.

The Teams user base even includes Microsoft co-founder and board member Bill Gates.

Microsoft wants to make Teams more powerful. It’s beefing up Teams with new features, including read receipts to show when people have viewed messages sent to them, and priority notifications for urgent messages that pop up every two minutes until recipients respond.

The priority notifications feature came about after Microsoft asked a team of engineers to watch how non-employees use Teams, said Jared Spataro, a corporate vice president. The engineers observed that doctors and nurses regularly moved from kiosk to kiosk, logging in and out of different devices, making it difficult to deliver critical, time-sensitive messages.

“What we started to do is figure out what’s missing, what is the glue that could follow them around,” Spataro said. The messages show up through on the Teams apps for Android and iOS, or on desktop. Because they’re so persistent, they’re more likely to grab people’s attention as they’re rapidly switching among devices and work tasks.

Users will also be able to moderate posts in channels, make announcements and post messages inside of multiple channels at once.

Looking ahead, Spataro wants to see Teams become more widely used among the 180 million monthly active users of Office 365, and the estimated 2 billion first-line workers, like supermarket employees, who don’t necessarily use PCs.

Meanwhile, Jha said employees are trying to figure out how to best integrate Teams with Outlook, so that people can reply to more messages from one single place.