Spot VIX is trading at the center of its one-week range (approximately 15.25-17.00), while stocks (SPY, DIA, QQQ, IWM, ACWX) try to sort out messages from the economy and progress on trade.

A lot of assumptions go into calculating the infamous unfunded liabilities tally for the “true” US national debt. Whichever assumptions you want to use, however, the figures end up pretty terrifying.

I’ve heard some pretty smart people say that if you think the last fifteen years have been politically contentious, just wait for the next fifteen.

All that said, I think that USTs hold their own relatively well in an environment of panic as investors try to adapt to a new world order: one where we have to run a more balanced budget through tax increases and through, gulp, spending cuts. Today’s period of low volatility is likely not going to last and has arguably sown the seeds of tremendous flux in the not-too-distant future.

Speaking of sowing seeds, is it really appropriate to cut rates when the economy is still doing pretty well (see Kudlow’s comments with CNBC yesterday)? I’m all for taking reasonable precautions, but it is dangerous, in my view, to treat all signs of economic softness as evidence for the next “big one”: not all recessions are crises.

Treating momentary weakness as a phenomenon to be fought and treated can lead to larger problems down the road (as suggested above by Mr. Thompson). 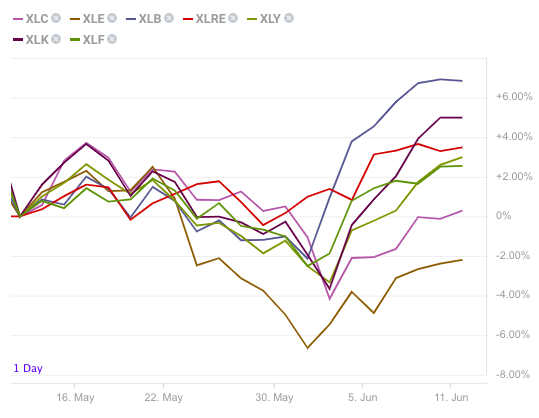 Last month was pretty good in terms of getting different market action out of varying sectors. Due to the sell-off in energy products (USO, UNG), the energy space (XLE) suffered the most. For those looking for volatility, pairs trading strongly trending in opposite directions can be a good method to explore. 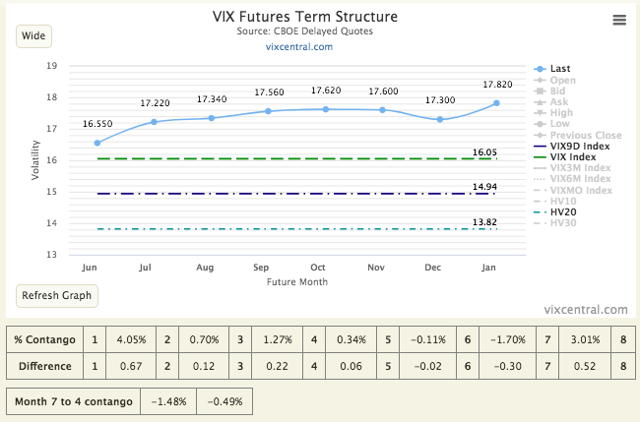 The term structure is working its way back into a state of contango. The June VX contract expires next week (Tuesday being the last full trading day), and so, will be more attuned to the fluctuations in spot VIX due to the cash-settle nature of the product.

Short-vol (SVXY, ZIV) seems to carry the advantage here, particularly at the front end. For those looking for vol to tamp down, I’d position to the front end early on and then re-weight out of a product like SVXY toward the back end.

Implied correlations are pretty average for this time of year in terms of how the KCJ reads. Often, the index starts with a fairly high print (say, mid-50s) around November-December, and then gradually works its way lower.

Implied correlations are an important determinant in how volatility is calculated. The higher the correlation between individual S&P components, the higher the overall SPX index will be (less diversification benefit).

KCJ at present isn’t at an extreme either way, which might indicate that there’s not much of a lean here, unless you take a view that we’ll get either a spike in correlation (for instance, on a failed trade deal) or that we’ll return to more of a “market of stocks” environment, in which case, implied correlations (and likely implied vol) will fall precipitously.

The IV (green) for VXX did a pretty good job not getting overdone back in mid-May: realized volatility gradually increased and has since done a big about-face as SPX has posted a strong recovery over the last couple weeks.

While the HV has really taken a dive, the implied vol on VXX is far less inclined to predict more of the same heavy ongoing drop off in future unrealized vol. This would presage that most of the decline in SPX realized volatility is behind us and not ahead of us. Expect there to be room for markets to remain on the choppy side, even if and as equities take another stab at all-time highs.

If this is your first time reading Market Volatility Bulletin, thanks for giving it a try. If you’re a regular, I thank you for your ongoing contributions in the comments section.

For readers who follow the closed-end fund space, I recently published a piece on diversified closed-end funds in a falling rate environment that may interest you. Check it out.

Disclosure: I/we have no positions in any stocks mentioned, and no plans to initiate any positions within the next 72 hours. I wrote this article myself, and it expresses my own opinions. I am not receiving compensation for it (other than from Seeking Alpha). I have no business relationship with any company whose stock is mentioned in this article.

Additional disclosure: I actively trade the futures and options markets, potentially taking multiple positions on any given day, both long and short. I also hold a more traditional portfolio of stocks and bonds that I do not “trade”. I do believe the S&P 500 is priced for poor forward-looking returns over a long time frame, and so my trading activity centers around a negative delta for hedging purposes.