Welcome to the December 2019 edition of the “junior” lithium miner news. I have categorized those lithium miners that won’t likely be in production before 2021/22 as the juniors. Investors are reminded that most of the lithium juniors will most likely be needed in the mid and late 2020s to supply the booming electric vehicle [EV] and energy storage markets. This means investing in these companies requires a higher risk tolerance, and a longer time frame.

December saw lithium prices fall again, and a quieter month of news from the lithium juniors. 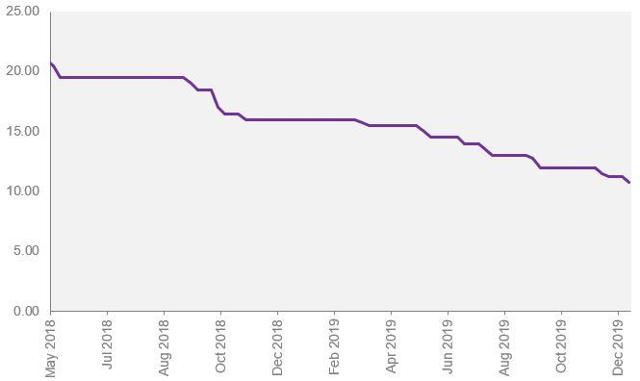 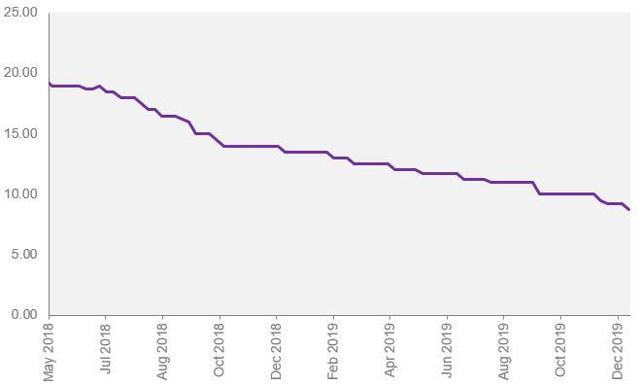 For a summary of the latest lithium market news and the “major” lithium company’s news, investors can read my “Lithium Miners News For The Month Of December 2019” article. Highlights include

Bacanora Lithium plc (“Bacanora” or the “Company”) issue of equity to Cornerstone shareholder. Bacanora Lithium plc (AIM: BCN), the London traded lithium exploration and development company, is pleased to announce that it has raised £7,729,150 (approximately US$10 million) via the placing of 30,916,601 new ordinary shares in the Company (the ‘Placing Shares’) with one of its long standing cornerstone shareholders, M&G Plc, at a price of 25 pence per Placing Share (the ‘Placing’), increasing their strategic holding in Bacanora to 19.9%. The net proceeds of the Placing will be used to support pre-construction works at the Company’s Sonora Lithium Project in Mexico…

Core 100% own the Finniss Lithium Project (Grants Resource) in Northern Territory Australia. Significantly they already have an off-take partner with China’s Yahua ($2.4b market cap, large lithium producer). The Company states they have a “high potential for additional resources from 500km2 covering 100s of pegmatites.

Investors can read my article – An Update On Core Lithium (Formerly Core Exploration), and a company presentation here.

The Mt Holland Lithium Project is a 50/50 JV between Wesfarmers and SQM, located in Western Australia. There is also a proposal for a refinery located in WA. Wesfarmers acquired 100% of the shares in Kidman for A$1.90 per share, or a US$545 million in total.

You can view the latest company presentation here.

Corporate update. Critical Elements… Over the last few months, Critical Elements has been in steady communication with Provincial and Federal regulatory authorities concerning the permitting of the Rose Lithium-Tantalum project (“Rose” or the “Project”).

Investors can read my article: “Lithium Power International Has A Very High Grade And Expanding Lithium Project In Chile,” as well as my ex-CEO interview on Trend Investing here.

You can view the company’s latest investor presentation here.

Investors can read my February 2019 article “Neo Lithium Is Just Too Cheap To Ignore.”

Investors can read the latest company presentation here, and an excellent video here. My CEO interview is available on Trend Investing here.

You can view the latest company presentation here.

AVZ owns 65% of the Manono Lithium and Tin Project in the DRC.

Argosy has an interest in the Rincon Lithium Project in Argentina, targeting a fast-track development strategy.

Proposed subscription by CEZ for a 51% interest in Geomet s.r.o. Further to the announcement on 20 November 2019, European Metals Holdings Limited announces that it has today posted a circular to shareholders (the “Circular”) containing the details of the proposed subscription (the “Proposed Subscription”) of €34,061,265 by CEZ a.s. (“CEZ”) through its wholly-owned subsidiary SDAS, for 51% of Geomet s.r.o. the Company’s wholly owned Czech subsidiary and the holder of the Cinovec licences.

Sigma is developing a world class lithium hard rock deposit with exceptional mineralogy at its Grota do Cirilo property in Brazil.

Note: Of interest was that Sigma Lithium’s spodumene has been successfully validated by several large potential customers.

Piedmont Lithium state they are “the only US lithium spodumene project,” with their 100%-owned Piedmont Lithium project in North Carolina. The company has already identified a 4+ kilometers of strike length in Phase 1 drilling.

You can view the company’s latest presentation here.

Plateau Energy Metals Inc. (formerly Plateau Uranium) is a Canadian lithium and uranium exploration and development company focused on its properties on the Macusani Plateau in southeastern Peru.

No news for the month

You can view the company’s latest presentation here.

Highlights for the month were:

As usual all comments are welcome.

Thanks for reading the article. If you want to sign up for Trend Investing for my best investing ideas, latest trends, exclusive CEO interviews, chat room access to me, and to other sophisticated investors. You can benefit from the work I’ve done, especially in the electric vehicle and EV metals sector. You can learn more by reading “The Trend Investing Difference“, “Subscriber Feedback On Trend Investing”, or sign up here.

Disclosure: I am/we are long NYSE:ALB, JIANGXI GANFENG LITHIUM [SHE: 2460], JIANGXI GANFENG LITHIUM [HK: 1772], SQM (NYSE:SQM), ASX:ORE, ASX:GXY, ASX:PLS, ASX:AJM, AMS:AMG, TSX:LAC, TSXV:NLC, ASX:AVZ, ASX:NMT, ASX:CXO. I wrote this article myself, and it expresses my own opinions. I am not receiving compensation for it (other than from Seeking Alpha). I have no business relationship with any company whose stock is mentioned in this article.

Additional disclosure: The information in this article is general in nature and should not be relied upon as personal financial advice.