In my last article covering Galaxy Resources (OTCPK:GALXF), I mentioned that shares of GALXF were smashed on the heels of the company releasing some rather disappointing Q1 production numbers at its Mt Cattlin operations, located in Western Australia.

Over the last year alone, shares of GALXF are down a staggering -52.34%. 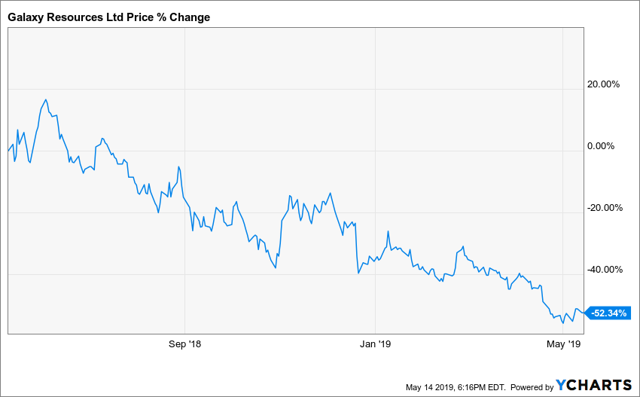 As a quick refresher, prior to the start of 2019, Galaxy had finished construction of its Yield Optimization Project (YOP) for Mt Cattlin, which was expected to boost recoveries and improve process efficiencies beginning as early as Q1. However, when the Q1 figures hit, we saw that the recoveries had only improved marginally to 51% (from 47% in Q4 2018, and well short of the forecasted 70%). Furthermore, the grade of shipped lithium concentrate had fallen to 5.60% (from 5.81% in Q4 2018), which is relatively low for battery-grade material (industry standard is 6%). 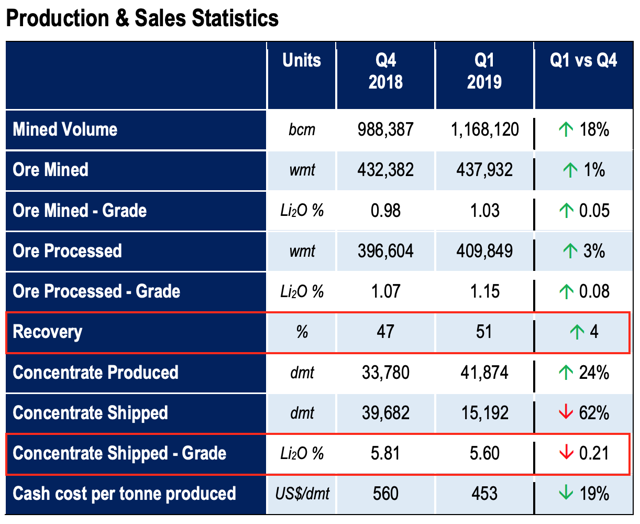 When combining the letdown that was the Mt Cattlin Q1 production numbers with a further update from the company that it has still been unable to finalize a deal/partnership with a third party to help finance construction of its flagship Sal de Vida lithium brine project, located in Argentina, and in hindsight, it could be argued that it’s been altogether unsurprising to observe that the share price of GALXF has been trading at/near 52-week lows for much of the last month or so. 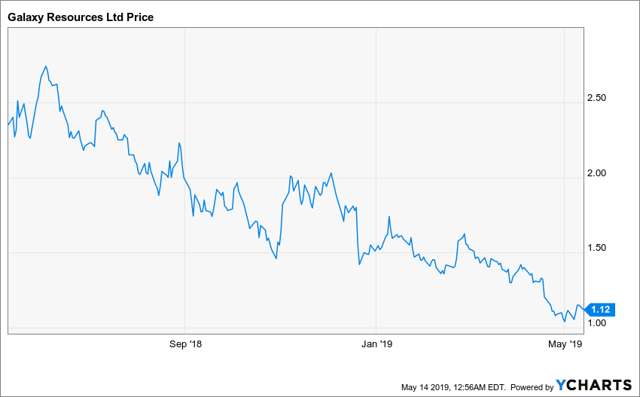 Suffice it to say, Galaxy Resources and its shareholders have been in much need of some good news to help reverse the downtrend, and they might have just received it with the company’s latest operations update at Mt Cattlin.

For the month of April, Mt Cattlin reported record production, with volume reaching 21,901 dry metric tonnes of lithium concentrate. Perhaps even more noteworthy, recoveries improved significantly and are now up to 61% (not quite 70%, but slowly trending in the right direction). Drastic improvement was also made in final product grade, which is now registering at 5.92%. And the kicker? Cash cost per tonne was reduced to $329/t (from $453/t in Q1). 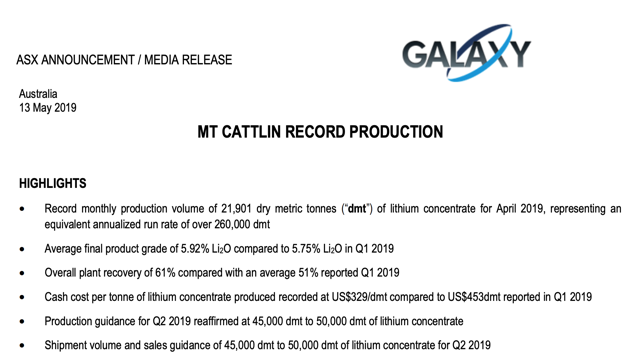 As highlighted in Altura Mining’s (OTCPK:ALTAF) latest Quarterly Activities Report (March 2019), it’s quite apparent that the window of “super high margins” for lithium concentrate producers (such as Galaxy Resources) has come to an end, as sales prices have retreated to the $600-700/t range.

An additional data point, courtesy of Altura Mining’s next door neighbor Pilbara Minerals (OTCPK:PILBF), shows an example of 6% lithium concentrate is being contracted for delivery at $675/t CIF.

In either case, current contract prices for 2019 clearly represent a steep decline from the record highs being settled in 2017/early 2018 for lithium concentrate.

As a refresher, Mineral Resources (OTCPK:MALRY) was negotiating prices with customers for as high as $960/t for 6% lithium concentrate in April 2018.

Because of the profound compression in profit margins for selling lithium concentrate felt sector-wide, for Galaxy Resources, it must be seen as a huge win that the company was able to successfully drive down cash costs at Mt Cattlin all the way down to the current figure of $329/t; every last dollar saved matters a whole lot.

Also, as I previously mentioned, at the end of Q1, Galaxy remained in a strong financial position, with $285.3 million in cash (before accounting for the $67.3 million in taxes Galaxy may be responsible for paying, due in May 2019, as a consequence of the POSCO transaction) on the balance sheet, with zero debt.

Certainly, there is no debate that Galaxy’s most important asset moving forward is unquestionably Sal de Vida, but for the company and its shareholders, it’s most encouraging to see that major improvements are being made at Mt Cattlin, which in the current tough market for lithium had become stigmatized and often labeled as a “mediocre” asset, possibly heading towards becoming an uneconomical liability in the near future.

However, now with record production numbers being announced for Mt Cattlin, on top of improving recoveries, increased grades, and lower cash costs, the narrative surrounding this asset might need to be revised in a hurry.

It’s been a tough ~1.5 years for lithium stocks, but the timing for Galaxy Resources releasing positive company-specific news might be as good as ever, since sentiment could be on the cusp of turning.

Most recently, Wesfarmers (OTCPK:WFAFF) sent shockwaves across the lithium industry when it announced that it was proposing to acquire 100% of the outstanding shares of Kidman Resources (OTCPK:KDDRF) for A$1.90/share, or a whopping A$776 million for the right to control a 50% ownership stake in the Mt Holland hard rock lithium project, located in Western Australia (and co-owned with Sociedad Química y Minera de Chile [SQM]). 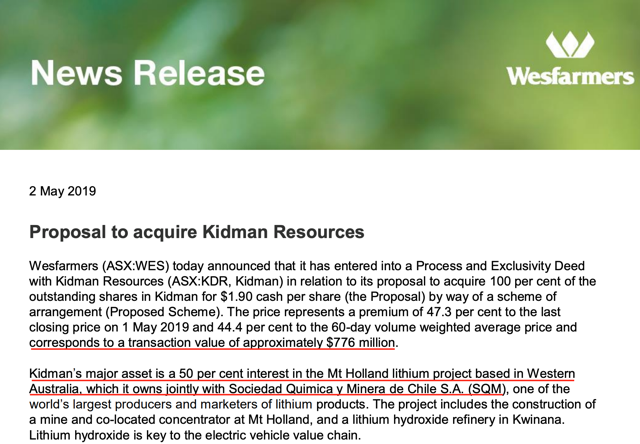 On a 100% ownership basis for Mt Holland, it would appear that Wesfarmers is valuing the project at ~A$1.5 billion (which has to been interpreted as most positive news for companies, like Galaxy Resources, who also own hard rock lithium projects located in Western Australia; i.e., Mt Cattlin).

Now, granted, Galaxy’s Mt Cattlin will never be confused as being a “tier 1” type of hard rock lithium asset; it doesn’t have anywhere near the size + scale to qualify as such.

But in any case, with a total resource of 16.7 Mt @ 1.26% Li2O, Mt Cattlin should still be worth something, and if the recent improvements made by the company that were highlighted in the previous section can stick (or be enhanced even further over time, with more refinement), this asset may eventually prove to be worth a lot more than the value currently being ascribed to it by the market (which isn’t much at all).

It is worth emphasizing that the lithium industry is rather nascent, and we are still in the very early stages of the electric vehicle (EV) hyper-growth story. So, for now, sentiment means everything, as most evident by the volatility that has been the hallmark characteristic of so many lithium stocks, like GALXF, in recent years.

However, again, with the most recent Wesfarmers data point now in hand, it would appear that market sentiment is starting to improve for lithium stocks on the whole, especially for hard rock companies operating out in Western Australia, since there is now a rapidly growing belief that high quality assets found in these neck of the woods are most valuable/coveted.

In fact, take a look below at the most recent share price spike up that occurred for Liontown Resources (OTC:LINRF), a hard rock lithium explorer/developer also operating out in Western Australia. 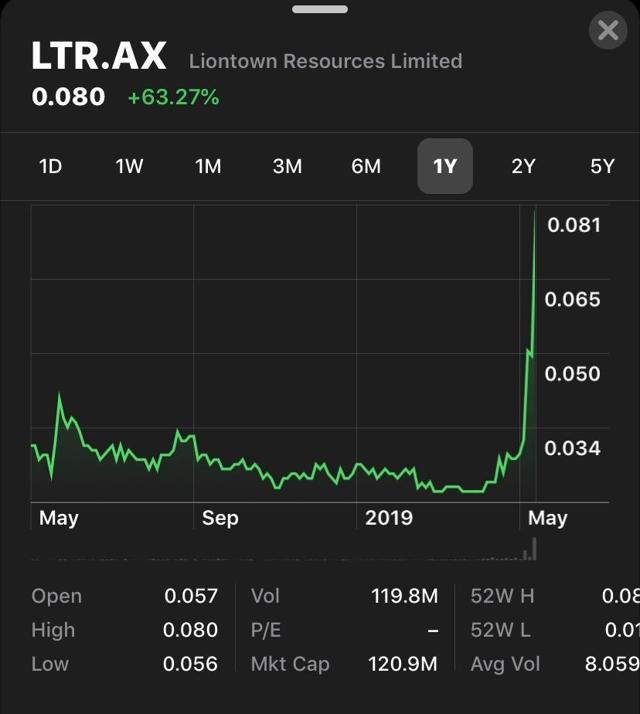 For Galaxy Resources, being able to keep cash costs down while still producing a high-quality product at Mt Cattlin will be key, as the ability to continue doing so could reap huge rewards if/when the next bull market in lithium takes flight again.

The share price of GALXF has been smashed over the last year and is down -52.34%. Thus far, the company still hasn’t been able to finalize a deal with any third parties to help bring their flagship lithium brine project, Sal de Vida, into production.

However, on the bright side, Galaxy’s sole operating lithium mine, Mt Cattlin, made huge strides over the last month and was able to set a record high in monthly production of 21,901 dry metric tonnes, improve recoveries up to 61%, increase concentrate grades up to 5.92%, and decrease cash costs to $329/t.

For Galaxy Resources, at least over the last month, fundamentals have gotten better, the company is still operating in a strong financial position with $285.3 million in cash and zero debt, and now sentiment towards lithium stocks is slowly starting to improve. Will this be the start of a turnaround story for Galaxy Resources and shares of GALXF?

Time will tell, but for existing shareholders of GALXF, this latest update from the company was some sorely needed positive news.

Disclosure: I am/we are long GALXF. I wrote this article myself, and it expresses my own opinions. I am not receiving compensation for it (other than from Seeking Alpha). I have no business relationship with any company whose stock is mentioned in this article.