Bitcoin, the cryptocurrency par excellence, has some special characteristics that justify the accelerated race to dominate the mining industry.

When Satoshi Nakamoto published the white paper on October 31, 2008, he laid out critical conditions for the future of the coin.

The most-significant characteristic that is intrinsic to Bitcoin is its scarcity. The supply would be limited to 21 million Bitcoins. The difficulty in mining BTC would increase and the reward would decrease steadily over time.

By imposing these conditions, Satoshi Nakamoto intended to emulate the processes of extracting scarce materials throughout history.

A brief history of commodity mining

History shows us that at the beginning of any type of exploitation, obtaining the reward is relatively straightforward.

In the next stage, the low-hanging fruit is exhausted. Moreover, competition – triggered by the news of simple extraction – intensifies the race. The presence of additional exploiters ends faster with the next phase of exploitation.

In the third stage of exploitation, the effort further advances, and there is even more competition for the reward and the product is rapidly scarce.

As a clear example, we can mention gold, which in Roman times was extracted in small open-cast mines, merely several meters deep. Today, the deepest mine in the world is more than 3.5 km beneath the earth’s crust.

When Satoshi Nakamoto gave birth to Bitcoin, a personal computer was enough to mine it, though not that simple. However, with time and dedication, a miner could extract what would be a fortune today.

Nowadays, any attempt to do something similar is virtually impossible. Large mining facilities – remotely located for reasons such as cold weather and lower energy costs – leave a personal desktop computer far behind.

On November 5, we have learned about the construction of the largest mining facility in the world. Led by a company called Whinstone and with facilities in Holland, Sweden, and the US, the facility is built in Rockdale, Milam County, Texas.

The project has a budget of $150 million and would employ more than 150 people.

A computing unit, electricity, and an internet connection are needed to mine Bitcoin.

Miners cost between $1,200 and $2,000 and must be renewed periodically to remain competitive. The Bitcoin algorithm guarantees this competition.

The difficulty is automatically adjusted to meet the rule of rewarding only 1 Bitcoin every 10 minutes – regardless of the computing power.

Miners consume a considerable amount of energy and generate substantial heat – which if not cooled down – can sink the performance and even melt the device.

The geographical location of the installation is key to ensuring profitability. A next-generation miner like the Antminer S17 Pro costs around $2,400 with a capacity of 60 Terahashes. Taking full advantage of its potential, it consumes about 2,600 W/h.

The table below demonstrates the electricity costs and benefits:

The halving event and its impact on Bitcoin mining

In May 2020, approximately on the 14th, miners, traders, investors, and HODLers all await what may be the most important event for the Bitcoin ecosystem: the 2020 halving.

Currently, Bitcoin mining results in 12.5 BTCs created every ten minutes – including the production time of each new block in the chain). That represents 1,800 BTCs per day. When the next halving occurs, in May 2020, the reward will be halved and will deliver around 6.5 BTC every ten minutes, which amounts to 900 BTC per day.

Bitcoin supply per year is reduced by 328,000 BTC. According to the schedule, there are 30 Blockchain halving events left until the creation of the last block. The last new Bitcoin will likely be mined around 2140. 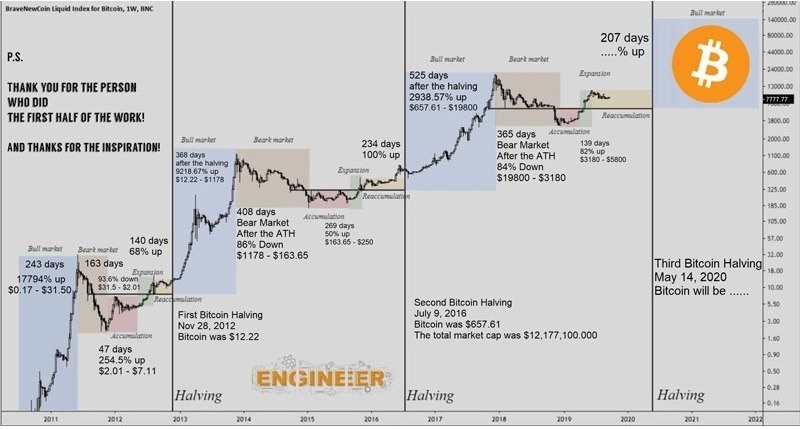 The impact of halving on the price of the BTC

Historically, every time a rewarding halving event has occurred, the price of Bitcoin has increased.

Each rally has so far compensated for the loss of economic performance suffered by the miners.

Following a linear logic, we can expect that after the next halving, there is a high probability of seeing a price increase of around 900% within a time horizon of a couple of years.

The projection of this statistical pattern indicates – as a probable scenario – a value of around $100,000 for one BTC in the summer of 2022.

Here are two theories about the casuistry that hides behind such Bitcoin riches after each halving.

– Law of supply and demand

Each halving reduces the supply of new Bitcoins to the market. If demand remains constant, but supply drops by 50%, then the price will tend to rise to balance the price formation structure.

– The predictability of halving

Contrary to any other commodity, it is possible to know when and under what conditions a halving will occur and how it will affect the supply of new Bitcoins. It is also feasible to project future mining costs under the new reward conditions.

Under these premises, we can think that the investments made in the mining industry will adjust their investment according to the environment and the expected changes.

The data show that the installed calculation power does not decrease after the halving event, which could mean that miners are trying to maintain or even increase their hash rate/BTC reward ratio.

The miners planning when to renew equipment or looking for more profitable sites must take into account the halving event in order to stay in the market.